For quilters quarantine I changed up my routine and decided to get a few little jobs out the way. First I made a needle pouch for the Q20 and then moved on to this caddy. Before I had a wedge of rubber covered in fabric velcroed to the top of the machine so the thread snips didn’t fall off but with all that real estate on top, I had to make something even better.

It’s taken about 4 days to do and it’s perfect. It’s about 16″ long, 2¼” deep and about an inch high. I don’t have a pattern for this but the left hand pocket is about 7″ and the centre one is about 5″. Please note (as a lefty) the most used pocket is on the left hand side. The built in pin cushion is just under 4″ long and was the fiddliest thing to hand sew in. There’s a layer (bottom and back) of ice cream container lid inside to prevent the pins going into the machine.

It’s been heavily engineered with a very thick, stiff felt covered in curtain backing with the fabric on top. I had to cover the felt because it’s black (and hairy) and would show through the fabric.  It’s all velcroed on with the soft side hand sewn onto the base. I’ve cut out the velcro around the screws and handle of the machine too. There’s plenty of room to thread the machine without the caddy getting in the way. The other issue I addressed was to make sure there wasn’t any excess fabric on the base where the items are placed when the sides were folded up. Okay, I was really proud of that accomplishment!

Here’s the bones sewn together and covered in the curtain lining. There are 3 separate pieces as I thought the felt probably wouldn’t bend well.

The hardest thing was to cut into one of my all time favourite do not cut this magnificent fabrics.  Before cutting into it, I made sure the fabric went with the blue spray paint that the custom sewing table will be eventually painted. I also wanted a fabric that went with the decals I made for the machine. 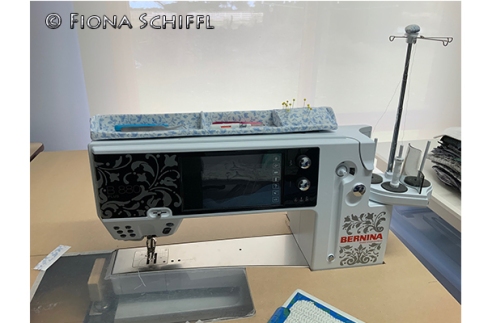 I’m still keeping my little needle pin cushion on top of the thread pole as it the only place any needles don’t get caught if there’s something large being moved around underneath. This is in the same fabric has my large pin cushion (not shown).

If you make one, please send me a photo. If you want more information on how I did it, feel free to contact me.

I will be doing a post on the sewing table at some point when it gets finished. It’s been 10 months of hurrying up and waiting and it is almost finished but the quarantine is probably going to throw its completion into chaos. It that happens, I’ll do a in progress post about it as it’s fantastic. It’s basically the same as my Bernina 730 table with the wings on the front to rest the elbows on but there is a hidden feature for the embroidery unit and the table is much bigger than it looks.

As we’re all in quarantine, here’s a photo I took several years ago in the Mt Buangor State Park in Victoria, Australia. And yes, I’ve already pulled out a couple of hundred fabrics to see if I have all colours and textures needed. 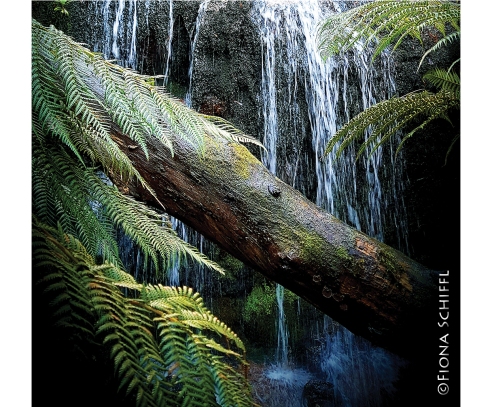